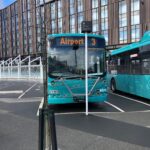 Karen Fehl had a quick trip to Christchurch in June to help with an ITSNZ event. She enjoyed using the super easy, minimum cost, convenient bus service to and from the airport. The zero emissions buses also accommodate bikes on these fold down racks. 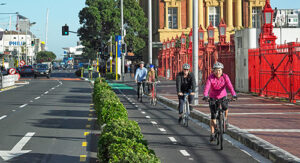 A number of Resolve staff attended the recent Transport Conference in Auckland, which looked particularly at Green House Gas (GHG) emissions and decarbonising transport.. Nik Vorster noted with interest that there seemed to be uncertainty between Central Government departments and institutions as to whether we should be working towards a carbon free or a carbon neutral future. The majority of speakers were aiming at being carbon free by 2050, but several other strategies and plans, including the Infrastructure Commission’s approach, is to become only carbon neutral.

Nik also noted that transport is being primarily blamed for CO2 emissions, but the real culprit may be current land-use policies that allow thousands of new houses to be built far from the city centre. The inevitable outcome is a rise in CO2 as people must travel further for work, shopping, school, etc., whereas using existing built-up areas would require less need to travel and distances would be shorter.

The big-ticket outcome for future projects will be the requirement to reduce carbon emissions as a major investment objective. As Stuart McDougall says, the main drivers for projects is to improve safety or to improve travel time. In the near future this is going to shift with emissions joining these primary drivers. This is seen to be a significant outcome and will feature in all future Business Cases as a standard requirement.

However, the methodology to measure GHG emissions is still up in the air, with vehicle kilometres travelled (VKT) and fuel sales being proposed as the most appropriate proxies. Waka Kotahi NZ Transport Agency is currently developing a climate investment tool to calculate emissions from the Regional Land Transport Plan (RLTP) proposed by Regional Councils. They have provided three examples indicating possible high level outcomes as to how much CO2-specific programmes generate. This has the potential to impact any of the Regional Council’s consultation processes through appeals to the Environment Court if Central Government targets are not met. It also means Councils will need to start measuring GHG emissions caused by projects, and approvals to development, including the steps proposed to mitigate the impacts.

Businesses will most likely lower carbon emissions by incentivising staff and through changes in operational procedures, but policy interventions are also needed to achieve various GHG goals (i.e. way to incentivise less uptake in SUVs, changes in regulations around imported cars, etc.). Alternative power sources (hydrogen and battery power) are also a possibility, but they are more expensive than fossil fuels (especially for heavy freight purposes), and electric power is currently more technologically advanced than hydrogen. Ports of Auckland is in the process of testing hydrogen busses.

Nik also noted that while electrification of the fleet will alleviate the CO2 component of GHG, it will do nothing for congestion, and charging the heavy-duty vehicle fleet (busses and freight) will require stations/points capable of high charging rates. Tests done with buses indicate it is possible to reload current public transport Bus batteries in five minutes with special equipment, but this is not available to a household.

On top of this, Auckland Transport say public transport patronage is about 75% of pre-Covid levels and they are not expecting it to pick up until the vaccination programme is complete or congestion increases. Stuart has heard people saying, “a bus is just a mobile petri dish.”

Even if PT patronage rises, this may not solve congestion issues. The US Government expects 20% of white collar workers to work from home in the future, and had expected Covid lockdowns to result in a massive reduction in congestion. But the Covid experience hasn’t borne that out, as the road space created by at-home working has simply led to others taking advantage of the lack of congestion to drive more. Many authorities in NZ are suggesting that Covid has just bought us time and that building more roads is not the solution. Stuart’s favourite quote from the conference was, “Adding traffic lanes to reduce congestion is like loosening your belt to reduce obesity.”

Other ideas included the construction of many more Onehunga-type innovating streets projects: blocking through-routes usually centred on primary school catchments to create walking and cycling zones, making it difficult and time-sensitive to drive through residential areas encouraging walking and cycling. Initially there may be time-limited closures controlled by number plate recognition cameras. There will be requirements to relook at zoning regulations that actively work against access – the nobility versus accessibility issues – within urban context (e.g. Paris’s 15 minute city). Mention was made that it is possible to develop additional electricity generating capacity but little was said about the infrastructure required and timeline needed to get this in place for Auckland specifically. Innovative collaborations were raises, such as Uber integrating with PT services and finding ways to improve trip sharing through variable pricing. There could be an increased focus on the application of the ‘beneficiary pays’ principle in transport pricing. Lastly, attention was brought to the fact that 53% of the transportation cost of manufactured goods happens in the last kilometre. Ideas for addressing this issue included the use of drones and more sustainable transport to deliver within the last kilometre. In a similar issue, micro-mobility in high density areas could encourage the use of more sustainable forms of transport such a as eScooters and eBikes.

Whatever solutions we finally adapt, one thing is quite certain, consultation and co-design are going to be a growth industry.